Creswell Crags was quick to highlight the plight of museums and heritage organisations during the covid-19 crisis, with their “future survival cast into doubt.”

The attraction on the Derbyshire and Nottinghamshire border is famous for its long history including Ice Age rock art as well as the more recent witches marks.

Not only did they use their reaction speed to their advantage, they made use of their high profile patron, Alice Roberts to help them raise money through crowdfunding on JustGiving.

Existing content has also been bought to the fore. A video tour based on 3D laser scanning was released in October 2019 but has been reported on more recently in the Derbyshire Times: Take a virtual tour of Creswell Crags’ Witch Mark cave with amazing 3D video. This perhaps shows an increased appetite from the media to highlight this type of activity that people can do from home.

I’m curious about what that might look like, and will be collecting examples of how heritage groups and organisations are using digital technology to open up access to heritage.

There’s a growing problem of spam traffic in Google Analytics, but recently I’ve been able to eradicate most of ours with one very simple filter.

Spammers are using the Analytics Measurement Protocol. Unlike the normal JavaScript implementation of Analytics, this is a server-side method. This means they can push data straight into your Analytics reporting without visiting your website.

Google analytics is a pretty open system. The account ID is all that’s needed to push data to your reports and these IDs are numeric so it’s easy for them to automate account IDs and have their servers push pageview and event data straight into your account.

How to detect and remove spam

When something like a pageview is recorded in Analytics there are also a lot of secondary dimensions recorded that you can use to verify whether it’s spam or not. 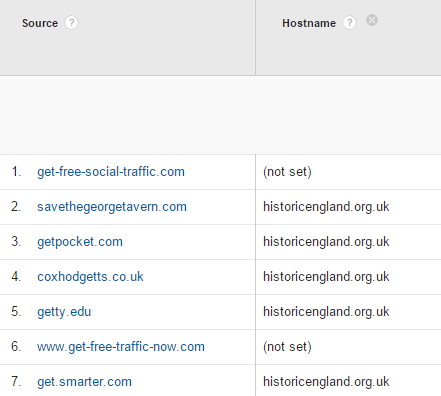 I used the Hostname dimension. It records the domain that the visitor was viewing when triggering the pageview. By adding the hostname secondary dimension to pageview, referral and event reports I realised that this was missing for the fake spam data. In the screenshot you can see genuine referrals with the hostname set to historicengland.org.uk. The hostname for spam traffic was (not set).

When I first tried to filter traffic based on hostname I set up a filter to exclude hostnames matching “” (blank) or “(not set)” but I discovered that a blank hostname is not the same thing as a missing hostname.

I changed this to a filter which I think is working well so far:

Only include traffic where hostname equals .

The full stop is a regular expression wildcard for any 1 character.

Another option would be to specify your domain name, but I felt that that approach was too specific. There are genuine reasons for using alternative hostnames, like Google Translate. Also in case the domain for our website did ever change then I didn’t want the Google Analytics set up to be so heavily customised that the rest of the team might change something which stops it working.

There are some other links which I used along the way to understand the issue, but they tended to rely on individually filtering out specific referral sites and I didn’t want to have to keep on top of that!

I’ve been dabbling at doing the internet since the late 90s and now I do it rather quite a lot. Since 2008 I’ve worked in digital heritage so despite not having a background in history I’ve grown interested in how it’s made.